From 1831-1840, 599,125 immigrants arrive in America. In the 1840s there was crop failures in Germany, social unrest because of rapid European industrialization of society, political unrest in Europe, and Irish Potato Famine lead to new period of Mass Immigration. From 1841-1850, 1,713,251 immigrants arrive in America. In 1848 the Treaty of Guadalupe ends Mexican American War. the U.S. gets Texas, California, and America Southwest which is about 80,000 people. In 1848 there was gold discovered in America.  in 1849 the California Gold Rush spurs immigration from China. In 1850 the U.S. surveyed for the first time the "nativity" of the citizens. In 1854 the Know-Nothing Party wanted to have restrictions on immigration, and won significant victories in Congress. Protestant Americans feared Catholic Ireland and Catholic Immigration would put American society under control of the Pope. In 1855 the Castle Garden established the first Immigration center to enter America in New York City. From 1851-1860, 2,598,214 immigrants arrived in America (Open Collections Program..).

This chart shows the large amount of Immigration, not only by Germans, but everyone who immigrated to America. 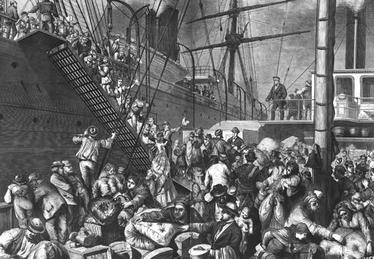 This photo shows people boarding a ship to go to America in the 1830s.
Powered by